Eri was an ophthalmology resident who identified herself as a Christian in a Muslim country in eastern Europe.  She had reached out to the COS several times over the last couple of years expressing a true spiritual calling.  I had engaged her via email to learn more about her interest in our society and to explore how we might support her.  To my surprise, this spring I had an unexpected opportunity to meet her when my daughter decided to go to her country to be a student teacher and I joined her.

Recognizing that being a resident in ophthalmology doesn?t necessarily mean becoming a competent eye surgeon, I was eager to learn about her system and her experience.  Eri was in her final year of 4 years at the Mother Teresa hospital, the only training center in the capital city.  She was eager to meet me and my daughter and I anticipated discussions about her training, her future, and potentially how we could partner in increasing her ministry within the field of ophthalmology.

It became quickly evident that she had been selected to never do eye surgery.  Her knowledge of their current operating room environment was roughly equivalent to an outsider knowing about the clandestine practices of an inner secret club.  Her attitude was one of rejection and disappointment, and it became obvious that she had spent several years in depression when she realized she was given a very limited outside track.  Her initial dreams had been to be a ?real doctor? who would save lives but, in her words, she was banished to an easy life of a doctor taking care of a limited scope of diseases involving ?just a small organ.?

In my experience, her plight wasn?t uncommon as many ophthalmologists in training around the world do not learn surgery.  Generally, one sees these ophthalmologists opening an optical shop and making their living selling glasses unless they are lucky enough to associate with another surgeon who might ?take them under their wing.?  Eri did not seem to have any interest in either one of these paths.  Her idea of patient care was quite different.  She believed she had been called to treat her patients — who had mental illness, adrenal tumors, or cirrhosis — in a very unique doctoring capacity.  She asked me to visit several of her patients with her, making a combination of house calls and visits to the oncology ward.

Dritan was a 40 year old patient with cirrhosis and ascites from alcohol.  We drove 45 minutes outside of the city to find him at his small caf?/bar where he ran his business to the locals.  He and his family lived just behind the small roadside restaurant which had 3 or 4 tables.  Inside were several male customers drinking beer and smoking.   Dritan was waiting for us and invited us to a table near his small counter.  This was Eri’s first visit to his place. 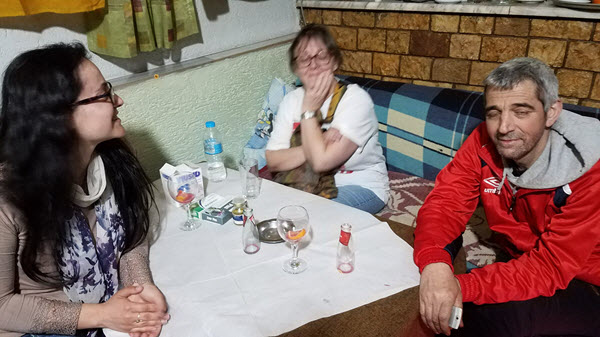 Eri began with what every physician is well trained in doing ? taking the history.  We sat down and listened to his story, and as he shared about being in a coma 3 times, he pulled his shirt up to reveal his ascites and the umbilical hernia associated with it.  She wanted to see his medicines which he gladly pulled from the small refrigerator.  IV human albumin and several other drugs that were certainly a bit foreign to the two ophthalmologists peering over his inventory of meds.  Why were we spending time reviewing these medicines, I wondered?

As we pondered his medicines, recognizing the grave nature of his disease, we began to share about how an eternal cure was more important for him than a physical cure and how this could be possible.  Ignoring his own plight, Dritan began to share about his real worry which was for his two small children and his wife, Valbona.  He really didn?t seem to have much interest in his own spiritual journey at this point.

As it turned out, Valbona suffered from severe mental illness and could barely function as a mother taking care of his two children.  Eri had been aware of this fact even before we came and had mentioned it to me in passing.  However, upon this discussion, she asked Dritan about our visiting with her and praying for her.  Dritan was open and led us outside to the back where he summoned her.

Valbona was a very sickly-appearing slender women holding a towel over her head.  She came towards us and was greeted by a warm embrace from Eri and immediate vigorous conversation that I did not understand.  Her body was shaking and trembling as someone might be who was possessed by demons.  It reminded me exactly of Bible times when Jesus was calling out demons.

Over the next 20 to 30 minutes, Valbona listened intently to Eri as they stood face to face and Eri shared about Jesus?s love for her and about His sacrifice.  Valbona shared about how she hears terrible voices at night that tell her to harm herself and how she cannot get away from these voices.  Before long, the towel was thrown down onto the ground and we began immersing her in healing prayer and laying on of hands.  We incorporated Dritan, myself, a local missionary and Eri as we laid hands on her quivering body.  Eri prayed fervently in the local language, and we in English, petitioning God the Father to release this women from the demons that possessed her.  The battle was real and one could feel the presence of evil grabbing her body and keeping it trembling.

These prayers lasted for what seemed like an eternity, however at one very defining point, there was an immediate cessation of the trembling as the demons were cast out and left the women in one dramatic moment.  We all felt the relief.  There were more hugs and prayers, but the ministry was just beginning.  Our next therapy was specific instruction on how to call on the name of Jesus to rebuke the voices and to claim His control over her life.  She listened even more intently and her body seemed to strengthen as we continued to minister.  At one point, she actually picked up her 8 year old daughter, holding her in a way that would have seemed impossible just minutes before.  Eri then lead Valbona through a verbal commitment and through what appeared to be an acceptance of the gospel.  Eri was delighted to greet a ?sister? in the Lord and rejoiced over this miracle happening.

As healing had obviously occurred, Eri now instructed us to pray for Dritan, who had stayed with us during this entire time.  Dritan now seemed more open to this prayer and we prayed for physical and spiritual healing for him.  Dritan shared more about his talents as a clarinet and saxophone player and we knew that he was a talented man who God could and would use.  Dritan shared that while he was in his coma, he had seen a beautiful meadow with flowers and had turned back from that to this world.  After his wife?s experience, he was now open to God?s gift and was led through a verbal commitment as well.  Again this was followed with joy of having another ?brother? in the Lord.

Dritan?s spirit seemed to have been lifted.  However, our ministry was not finished.  We prayed over their two children as they had joined us in the small courtyard.  The 12 year old son was very present in the moment and gazed at Eri intently as she spoke with him and prayed over him.

Next, Eri mentioned that we now needed to return to the bar/caf? as there was a man who had suffered meningitis that needed prayer.  We called this man, who appeared to have the intellect of a small child, down to a table in the front of the bar.  We prayed over him and he was open and smiling to the gracious words of the Good Physician.

The house call finally came to an end, and we shared more with Dritan and made a followup plan for him and his wife.  Eri was thankful for my presence and the presence of the other local missionary as her ministry of healing prayer had obviously made her an outcast in her field of ophthalmology.  We also recognized the strength of more than 2 or 3 gathered together to call on His name.

As I reflected on the plight of this young ophthalmologist who went into medicine to save lives and yet was dealt a blow where she was in reality shut out from learning what she had dreamed to learn, I recognized that I had met a type of ophthalmologist that was outside of my paradigm.  Eri seemed minimally interested to learn more about ophthalmology or surgery, since this path was closed to her.  In fact, through her experience of depression and through the support of some local missionaries and her church, she had recognized her role in the healing ministry of prayer.  In this ministry, as a physician, she could use her access to suffering patients who were getting very little help from local health care, to engage them in a healing prayer for their souls.

To Eri, the followup of these patients was very important and she was very committed to caring for these patients over the long term.  I called Eri an angel as I saw her rejoice just like an angel in heaven over another soul coming to Jesus.  She corrected me and said that she considered herself a minister.  I certainly could see her as a modern apostle in her country.

In my reflection of the events and circumstances, I recognized with even more clarity the critical importance for any ophthalmologist who is performing cataract surgery in Christ?s name outside of their country to be coupled with local ministers, apostles, and others who are passionate for not only physical restoration but spiritual restoration.  As we all know, the spiritual journey is difficult and needs followup visits and long term spiritual care of the patient.  I was impressed with how trite it seems for any missionary not versed at all in the local language to offer a short prayer for someone who doesn?t understand them and to part ways after a brief encounter.  While offering a glass of cold water or a cataract surgery in Christ?s name is an important step of obedience, real spiritual life change more likely happens when a committed native speaker is called to get down and dirty, take the extended history, engage the hurting patient in their actual life struggles, perform healing prayer and share the gospel at the level of the patient, ask for verbal commitment and then do long-term followup.

The challenge for the busy ophthalmologist within their own culture and language group is how to really engage their patients for real life change.  However, Medicare does not pay for this extended history or healing prayer ministry.  Eri didn?t seem to be paying attention to any reimbursement issues during her passion and call to the healing ministry of prayer.  Are we committed native speakers who desire real life change in our patients? 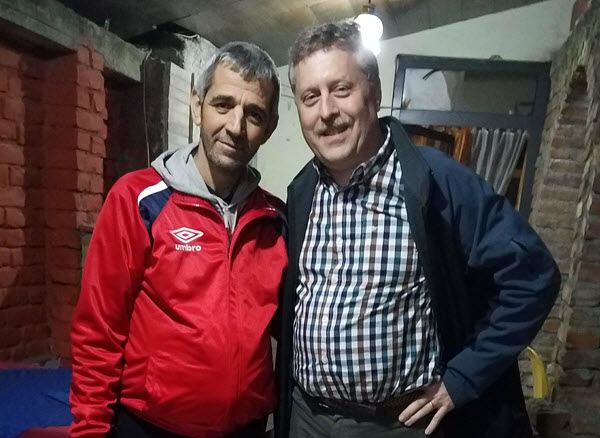