His faithful walk with Jesus and his efforts to give both physical and spiritual light to others is an inspiration.

Dr. DeHaven was born in Benton Harbor, Michigan and attended the University of Michigan’s medical school.  After completing his college years at a time during the Korean War, he entered the U.S. Army’s deferral program where he completed his residency program and received his training in ophthalmology for six years.

Being a friend of Dr. Bill Grice, who founded The Lighthouse for Christ Mission in Mombasa, Kenya, led him to cross the ocean many a time to relieve this missionary physician for times of rest.

Not only did he make trips to serve as an ophthalmologist there, he eventually became a board member of the Lighthouse for Christ Ministry.  He was very instrumental in getting a modern hospital in Mombasa up and off the ground and running as he worked with architects and others in making the vision become a reality.  When he would return to the U.S. he would be active in raising funds for the project.

Dr. DeHaven would return to Kenya annually to operate on patients and to train upcoming physicians there.  This hospital is now recognized by the University of Nairobi as a place for training physicians.  Presently, there is a native Kenyan ophthalmologist at this unique hospital that treats all kinds of eye disease and children’s eye conditions too.

On Thursday, October 17, 2019, after bravely struggling for years with Alzheimer’s disease, Dr. C. Roger DeHaven went to be with his Lord. He was 87.  As the 2005 J Lawton Smith Award Recipient, we would like to remember Dr. DeHaven and the work that he did. His faithful walk with Jesus and his efforts to give both physical and spiritual light to others is an inspiration.

Dr. DeHaven was from Tyler, TX.  He set up his private ophthalmology practice in Tyler shortly after moving there in 1964. Over the course of his career, he did over 23,000 cataract operations and was the first surgeon in East Texas to design and build a Medicare approved ambulatory surgical center.  His involvement in the Lighthouse for Christ Eye Centre Mission in Kenya, East Africa was one of things he most treasured. He loved the Lighthouse and often said that was the reason he was put on this earth. He is responsible for the design and construction of their new Eye Center and building expansion that sits on the 2-acre Mombasa, Kenya, campus today. 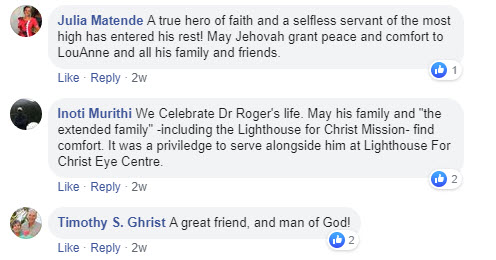 He is survived by his wife Lou Anne whom he married on December 27, 1953. They enjoyed a long and happy marriage and were able to stay together throughout the progression of his disease, thanks to her tireless efforts.  They had 5 children including son Thomas DeHaven who still practices in Tyler at the DeHaven Eye Center.

If you know the family, please send them a note of support or add your comments here..   Click here for his obituary.