So at home, when we do eye surgery, I would guess that a lot of us take for granted the trust that it takes for a patient to lay on the table and let us operate on their eyes. I think that level of trust is even more exaggerated when we go into the overseas mission field where there are huge cultural and communication barriers. I became very aware of this when my family was on the other side of this need for medical care in a foreign country where we didn?t speak the language and things were generally just foreign to us.

About nine years ago at this time of year, my family packed up to go on a trip for spring break. We had no plans until a few days before departing and I decided to book a last minute special. Since it was less than a week before the trip and no one was showing any signs of illness, I decided not to book the trip interruption insurance (a little foreshadowing here, but that ended up being a bad decision). The whole family got super excited and we packed up and left on Saturday morning and flew to Punta Cana in the Dominican Republic. A few hours later we arrived at our resort that had this huge water playground right outside of our rooms. The kids played for most of the day and had a blast.

While my wife Heather and I were getting ready for dinner, my two year old son and five year old daughter were chasing each other between the bedrooms. At one point during the chase, my son slammed the sliding door to his bedroom one too many times and this time, his thumb was sticking through the doorway when he slammed it. When we heard the screaming and opened the door, my son had cut the end of his thumb… off! Okay, it wasn?t completely off but it was only hanging by a sliver of skin and the bone was sticking out. 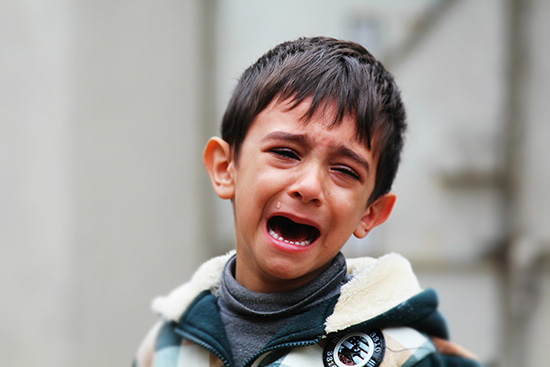 At this point I freaked out a little because I knew he was going to have to be put to sleep to fix this as he was only two years old, and we were not at home in the good old U.S. We quickly called the front desk and they recommended a cab to take us to an emergency room in Punta Cana. Once we arrived, the only person we found that spoke english was the woman at the check in desk who told me ?we take Visa and MasterCard?. We paid the $7,000 they told us they needed up front to treat my son and they took us inside and checked him in.

The doctor who came in spoke just a little more English than I did Spanish so little by little we were able to communicate. He told me what they planned to do and then they took my baby back to an operating room. We walked back with him and sat in a row of chairs right outside the OR where we could hear everything. The whole time we could hear what sounded like people yelling at each other. They were probably just doing their job, joking around just like we might do, but being that my wife and I did not speak much Spanish, we had no earthly idea what they were talking and yelling about, we just knew we were terrified because our baby was being put to sleep by people we didn?t know in a foreign country.

The whole time my son was in the OR, Heather and I prayed (isn?t it amazing how much more in depth your prayer life gets when things turn south)? I began by praying that my son would have a good outcome, but that quickly gave way to praying that my son would simply live through anesthesia in a place where, frankly I knew nothing about their level of medical care. I had initially thought that they might not be able to reattach the thumb or that without vascularization, that the reattached tissue might die off. I thought so far ahead as to think that maybe later in life he might have a wicked curveball because of a shortened thumb… none of that happened. My son actually came through the whole ordeal very well.

One of the things that struck me the most when looking back at our experience was the amount of trust that we had to place in the doctors who were caring for our son. When Hayden hurt himself, Heather and I had to trust that God was watching over Hayden but we also had to trust that the doctors there could help, when we knew absolutely nothing about them. When we do medical missions we are foreigners in their country and we often don?t look like the people we are helping or talk like them. For us to be able to help, they have to put a tremendous amount of trust in us. That trust that is given to us as physicians is a very big deal and I try not to take that for granted, whether that be on a foreign mission field or in the operating room at home.

Often, the patients we are caring for are terrified and we should always be mindful of that and should try our best to be a calming influence. That fear is even more magnified on foreign mission trips where we often use no sedation. Our family?s experience of dealing with the fears that go along with being on the receiving end of patient care in a foreign country has really made me focus on trying to put my patients at ease.

On trips where our main goal in helping treat medical problems is to share the love of Christ, I find it helpful to communicate that love in whatever way possible. Sometimes when there are language barriers, a simple touch or holding a hand can go a long way to calm fears and help show our patients the love and compassion of Jesus. I have never seen this more vividly than when on a recent trip to the Dominican Republic, my fourteen year old daughter asked me as I was beginning a surgery if she could hold the patient?s hand. She said he just looked like he was really nervous and so she held his hand through the entire case. Sometimes if we want to know best how to show God?s love to those we are helping we should put ourselves in their shoes… or just ask our kids.